Return to All Templates

Google Search Console provides search history source data from the top search provider in the world... Google. The data is very useful if you're running a business in which garnering online eyeballs is of importance. Even with other SEO tools at your disposal (like Ahrefs, SEMRush, Serpstat... there are so many solid tools), you'll never have a more accurate version of the truth than working directly with Google's data.

If you're new to the world of SEO or don't have a data engineering background, creating a forward looking perspective based on historical search results can be intimidating. The nice thing about organic search is that, if you're on to something (i.e. showing up in search, retaining visitors, ranking adequately for search terms, etc.), the results tend to compound over time. Following the lead of Tom Capper and others in the search field, we built a very simple model to project gross profit and revenue impacts of growing (or declining) organic search visibility. We based it all on data directly from Google Search Console (and then, as usual, a bunch of business assumptions).

With this model, we are trying to project the future revenue and gross profit impacts of increasing search visibility on Google via organic search efforts. This is based on a twelve month Google Search Console extract, which includes a 'dates' tab on impressions and clicks for your domain. With that data and some assumptions on conversion rates, we can extrapolate future revenue and gross profit contributions directly from search.

The result of this model may be a scenario analysis, a budget conversation justifying return on investment, or an update for the executive team. The ability to create a sound (albeit assumption laden) perspective on organic search efforts could be used in many different ways. 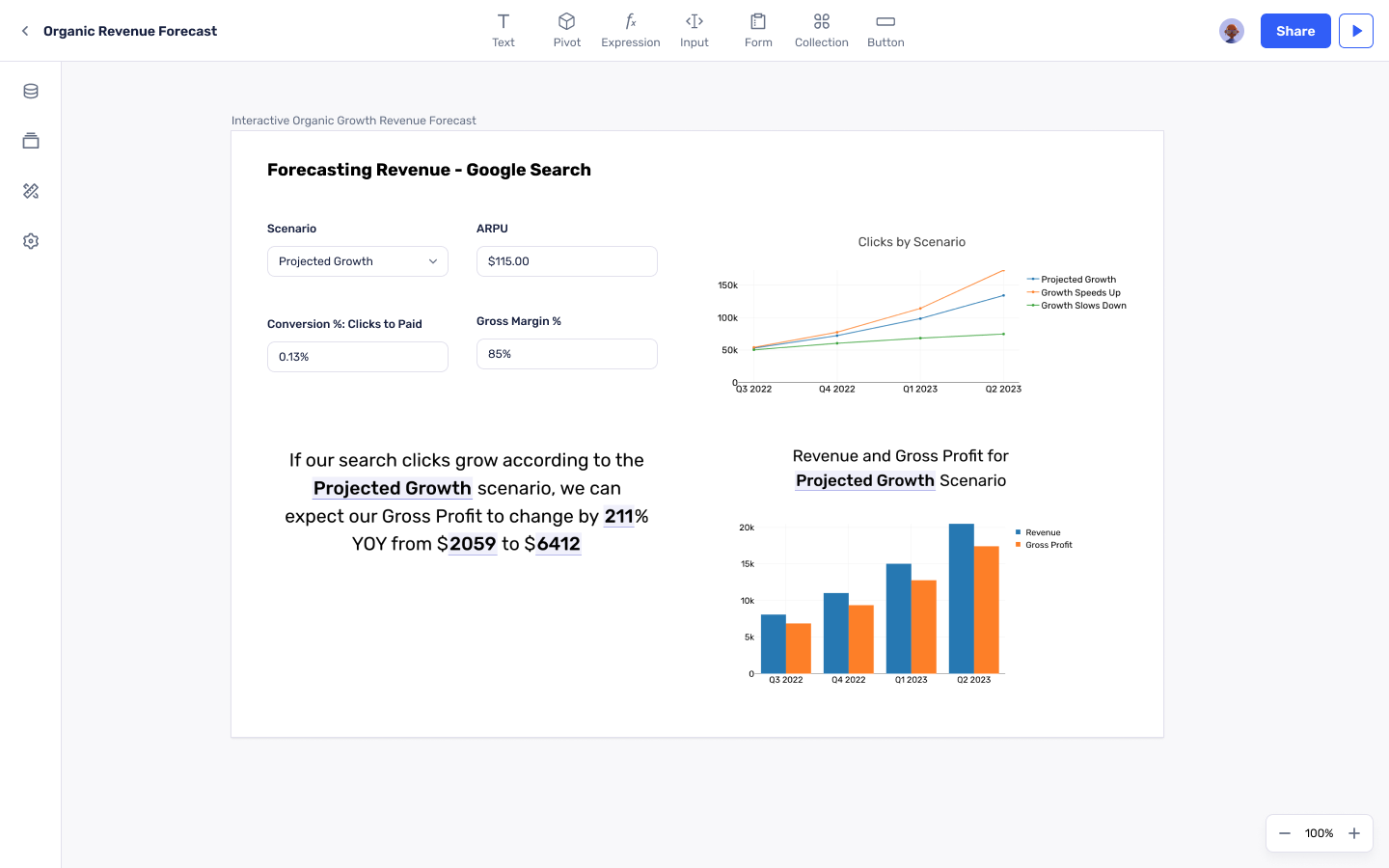 The growth in monthly clicks derived from the aforementioned historical data (or tweaked to show a scenario analysis).

If you're unfamiliar with calculating compound monthly growth or you're unsure of your assumption, pivot the 'date' data in Google Sheets by month to see the sum of all clicks each month for the trailing twelve months. Use the following equation to get a compound growth rate from your own historical data: CMGR = [(Latest Month/First Month)^(1/# of Months)] - 1

The rate at which visitors convert to paying customers. Based on business data (or set as an assumption).

The average revenue for a user converting from visitor to paid. Based on business data (or set as an assumption).

Used for gross profit calculation. Gross profit is useful in determining how much cash is contributed back to the business for reinvestment or funding future efforts and growth. Based on business data (or set as an assumption).

Use the export functionality from Google Search Console under Performance -> Search Results. Make sure to change the date range to 12 months. Pull that bad boy into Google Sheets or Excel. Use some data formulas and a pivot table to convert the 'Dates' tab into sum totals of clicks and impressions by month.

‍The model assumes a monthly time series, starting with the last full month of clicks and conversion to paid users (use actuals). The model will assume a twelve month forward projection.

For each month in the time series, the model will calculate the following:

By using this model, you should arrive at a projection of future revenue and gross profit contributions that can be attributed to organic search. It's certainly not bullet proof, but it gives you the beginning of a model that can grow in complexity and accuracy over time.

Determining how much to invest or how much time to spend improving SEO can be tough. With this model and some basic assumptions, you can show the potential opportunity for revenue and gross profit contribution attributable to SEO. This can drive the right conversations and business decisions for those less familiar with the data driving SEO decision making.

Superdeck is a no-code app builder that makes it easy to build beautiful, lightweight web apps to automate processes, create interactive plans and prototype ideas without any code. Join our waitlist to access this template.